Artist, Illustrator and professional architectural photographer. Herewith in his own words is his biography. "I was Born in Balham, London a long time ago. Left school at 15 and started work at Harrods in the display department in 1958, 2 years here. As well as going to Putney school of art, and St. Martins in the evenings. Then onto City Display Organisation, travelling around the south of England doing window displays for about 3 years. Another 2/3 years at cosmetics companies, again design and window displays. But all the spare time painting motor racing scenes, all on commission. Sold my first to Don Parker who was 500cc national champ at the time, I think I was about 12 then and still at school. Don used to take me to all the races around England. And introduced me to the then, current racing stars. E.g. Graham Hill, Stewart Lewis Evans, Archie Scott Brown, Jack Brabham. To name but a few. My father having introduced me to motor racing when I was about 8. I think he was quite glad that he didn't have to take me, as we didn't have a car at this time. I Was then offered a assistant display manager at the department store, Derry and Toms in Kensington, which was great and lasted another 2 years. Then late 1960s a job for Les Leston Motor accessories, designing window displays and exhibitions. Also working with the designer Derek Newton, who did Most of the shell schemes at Earls Court, Olympia, and various other exhibitions around the country. I remember diving up the M 1 to Harrogate with a 8 ft crocodile sticking out of the sunroof. This was for a Michelin stand. At one Motor racing show at Olympia, I presented a painting to the winners of the London to Sydney marathon, via BRSCC. At the same exhibition, I designed and built a stand for a competitor of Les Leston, (not too sure if he knew) also the centre display of that years f1 cars, which was supposed to be static. I happened to suggest to Derek Newton , why not have a driver in "action", behind the wheel.!! I ended up making a chicken wire torso of Graham Hill which I dressed in his overalls and helmet, the only bit was a have to sculpt a head, showing the eyes. As everyone wore face masks then, which was handy. Anyway it turned out ok, and even got a mention in "Autosport"that week. "Saying Graham opposite locking the Gold Leaf Team Lotus, on the banking!?" On the centre attraction. Started racing in the late 60s.( again I was really busy then) with part sponsorship from a clothing company in Kensington Market, called "mother wouldn't like it" I shared with my good friend Terry Nalden in a mk1 Sprite, the other car was a mk2 with a 1200 engine, and driven by Bob Evans. Both were painted in Purple. Ours was not that successful but we did that for a few seasons. And was great fun. During this time I got to know Alan Baillie who was racing a Lotus Elan, in sports cars. He had a Dulon FFord which was converted to a monoposto format. I mechaniced for him the following year in the monoposto championship, which he won for 3 years running. Later I Helped a bit on a clubmans car, the"Hustler"built by Richard Groombridge. Who also did well. The commissions were coming thick and fast, with the club scene, selling at least 2. a week. Also photography. Which I was using as a reference for the paintings, and selling them as well. A commission from Ronnie Peterson in the Vicks f2 march. I think this was for his manager. James Hunt took me to lunch to try a persuade me to do a painting for him, at a greatly reduced rate, he did buy lunch.i completed it anyway. Denny Hulme commission of Range Rover and boat.! The photography took another turn, as I had got to know an estate agent in Wimbledon, who asked me to do some black and white photographs for his window, which I did. Then it it seem to snowball, as the agents had a branch in the Kings Road Chelsea, before long I was photographing for the majority of estate agents in London. Also doing Artist impressions of the outside, and sometimes interiors of buildings. As the majority were covered in scaffolding. So not possible to photograph. This progressed to Southern Ireland, which literally exploded with commissions, as I seem to be the only person doing this, in think one client said, "there is only ..one other, and he's in pub. " I would get a pile of plans and elevations, of mainly shopping centres, in the morning post, I always insisted on hard copy, unfortunately they were usually ,A1 size, so it would take me a day in interprete them, and of course they were needed the following day!!!!...... so I would be working 24 hrs a day 7 days a week, or it seemed like that.. I decided to slow down the photography about this time as it was getting too difficult getting around London. I still get clients phoning to ask if I still photograph. But I much rather stick to painting, cars, houses, planes, horses, and anything else that takes my fancy. I am now semi retired, but still have a large client list, although CGI has helped me with the workload. As I don't get involved with that. I spend my time travelling to Kenya, 2/3 times a year with my wife, where we do a lot of work with the people, and schools in a small village. I also scubadive there as well, which I have done for 30 years now, also mountain biking when I get the chance. I have a couple of old cars, one a real classic, which I work on frequently." 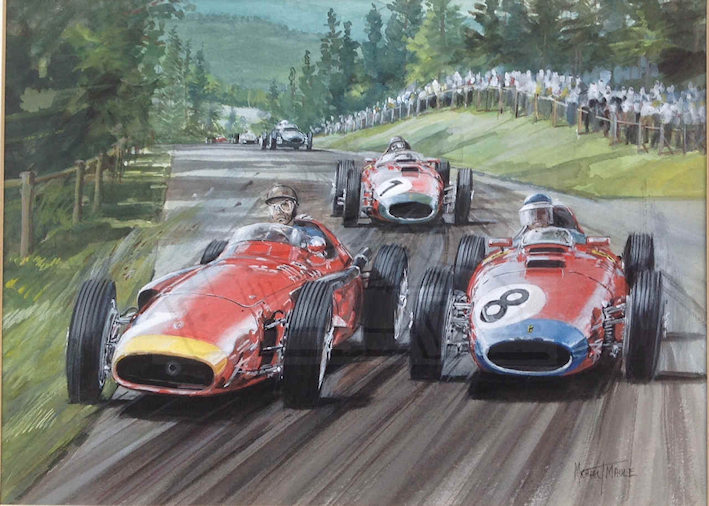 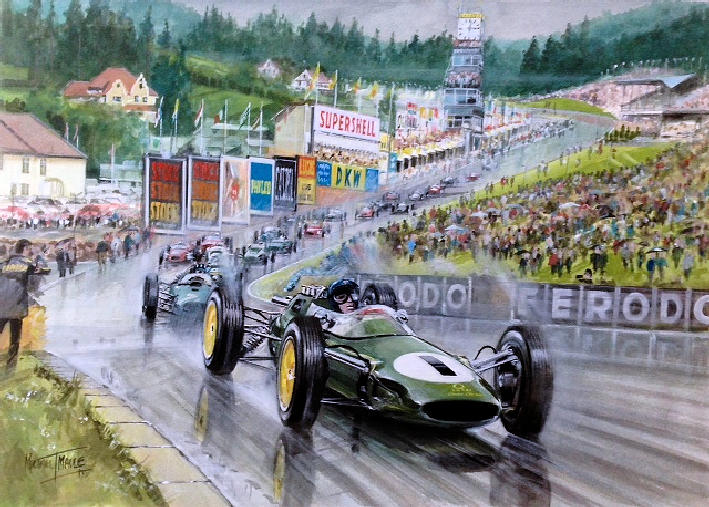 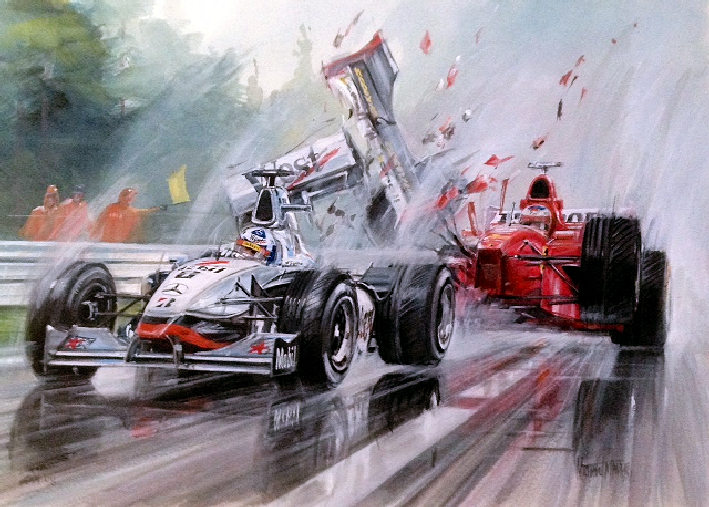 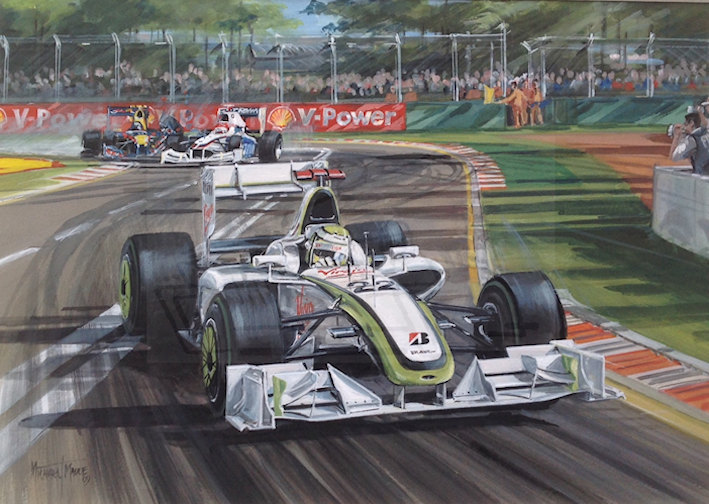 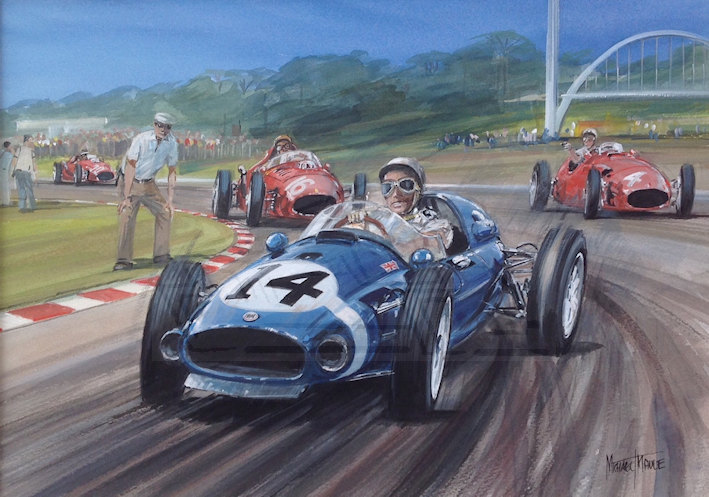 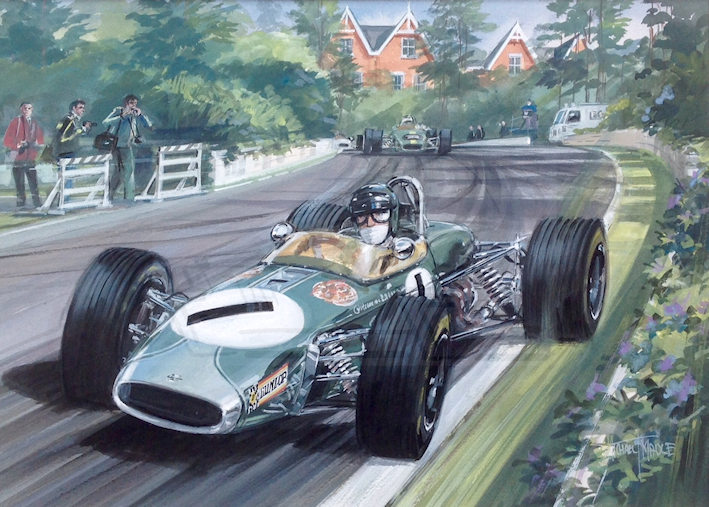 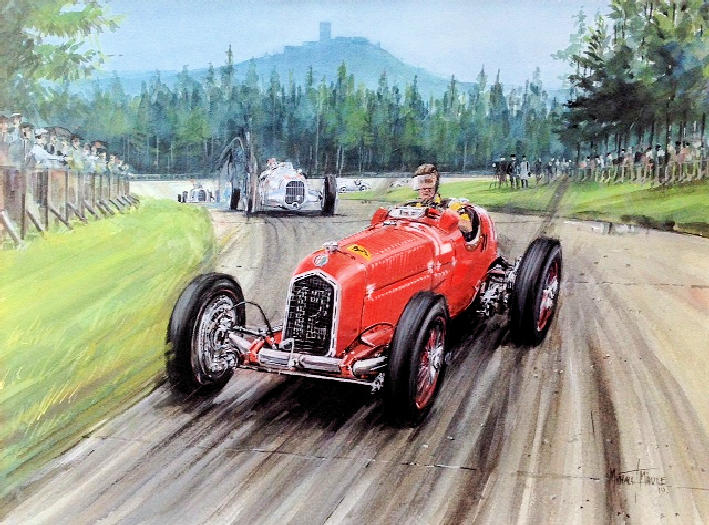 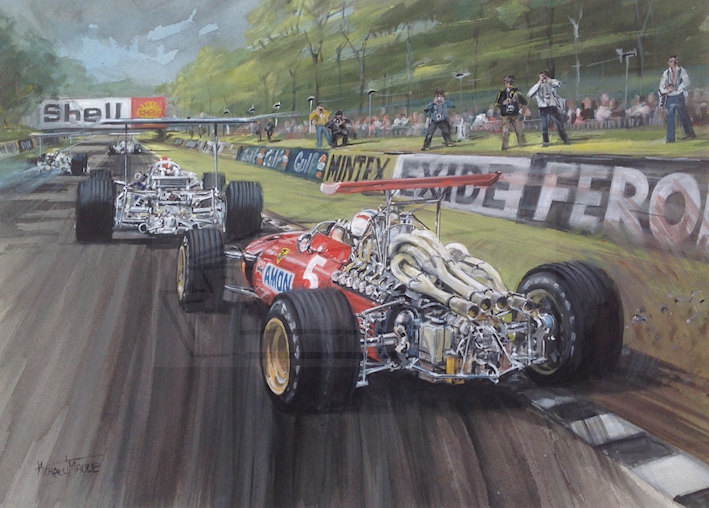 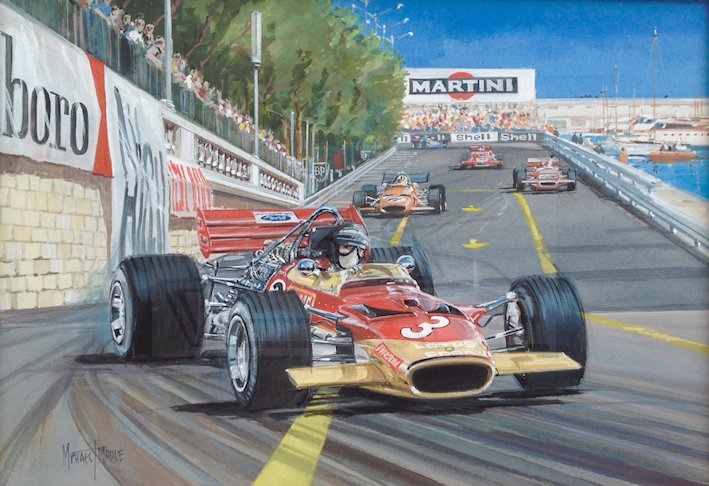 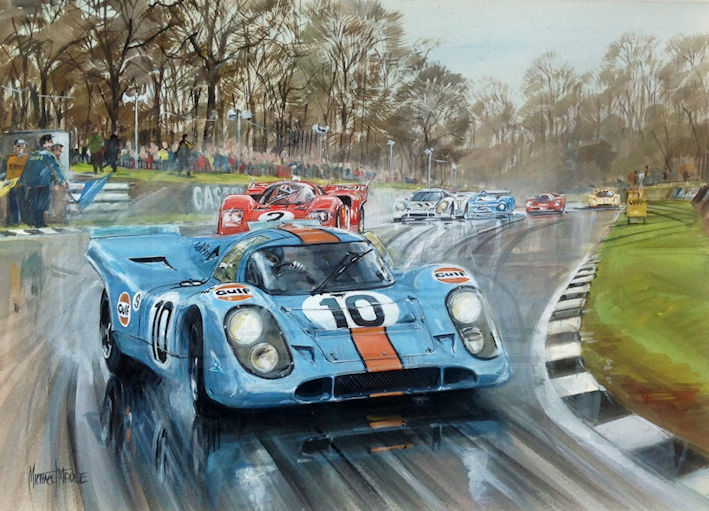 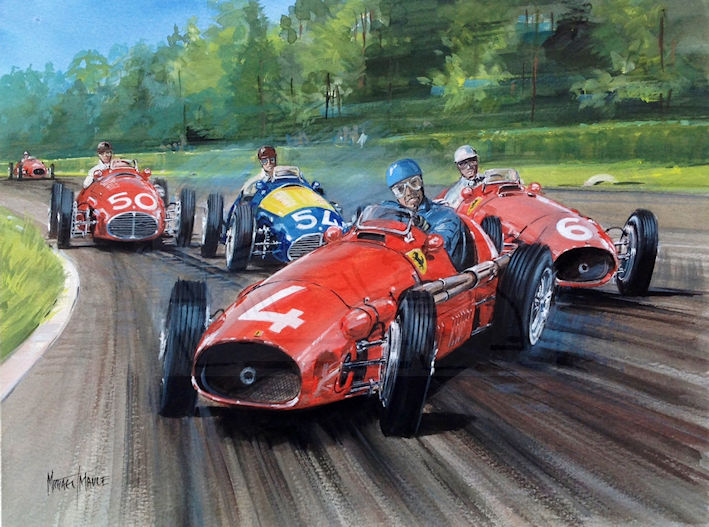 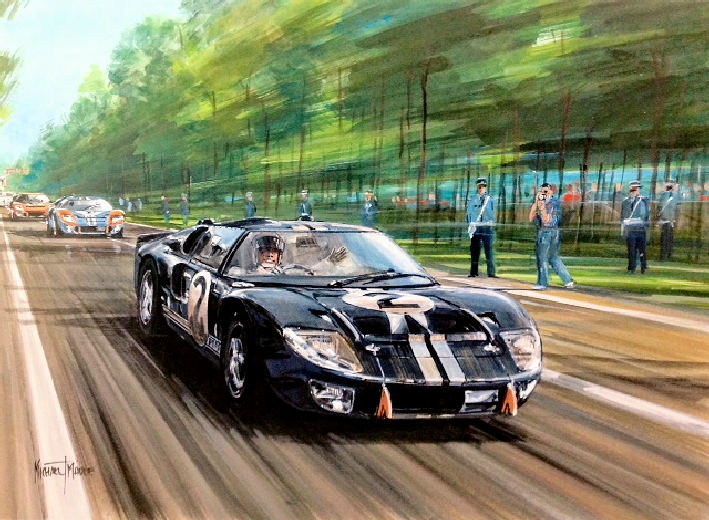 Ford GT40 McLaren Amon Le Mans 1966. Bruce at the wheel giving me a wave, I'm the one inbetween the two gendarmes (with cine camera, yes it was long ago)who allowed me to stand there. 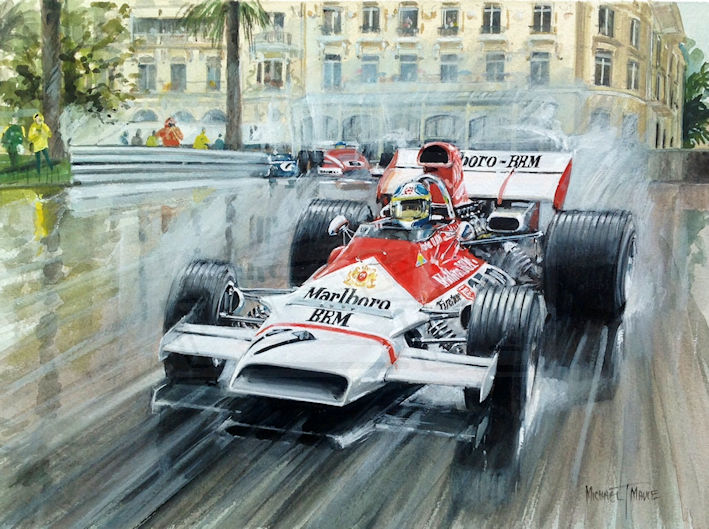 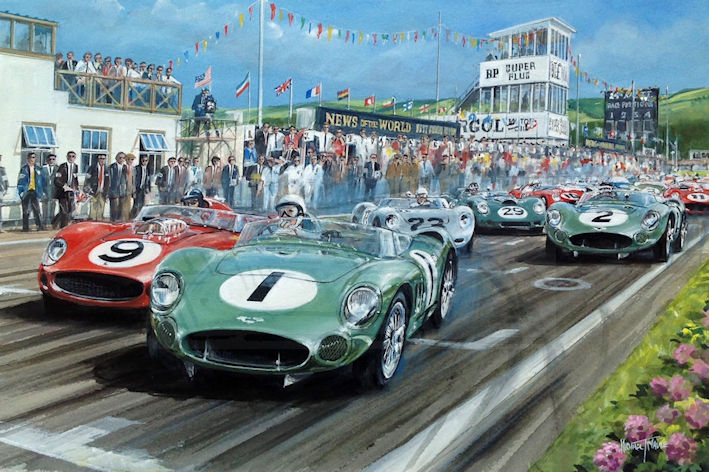 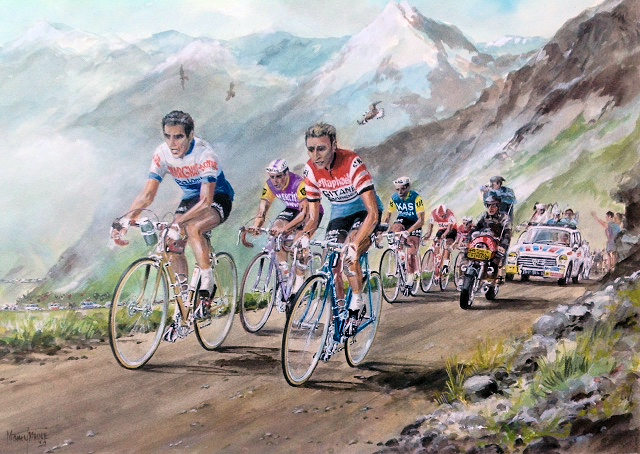 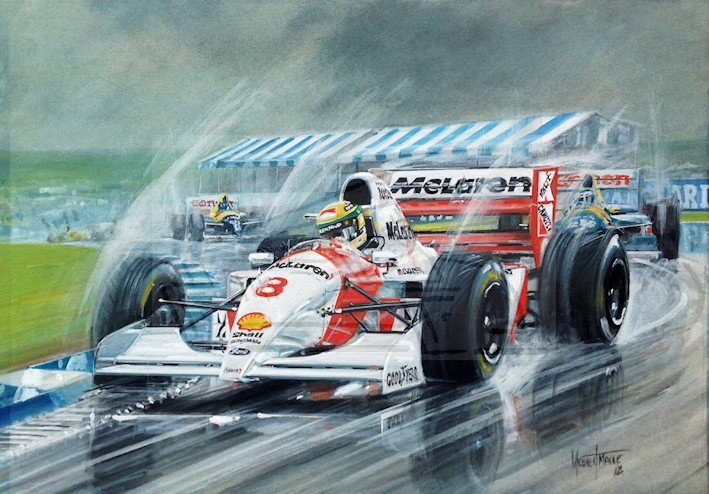